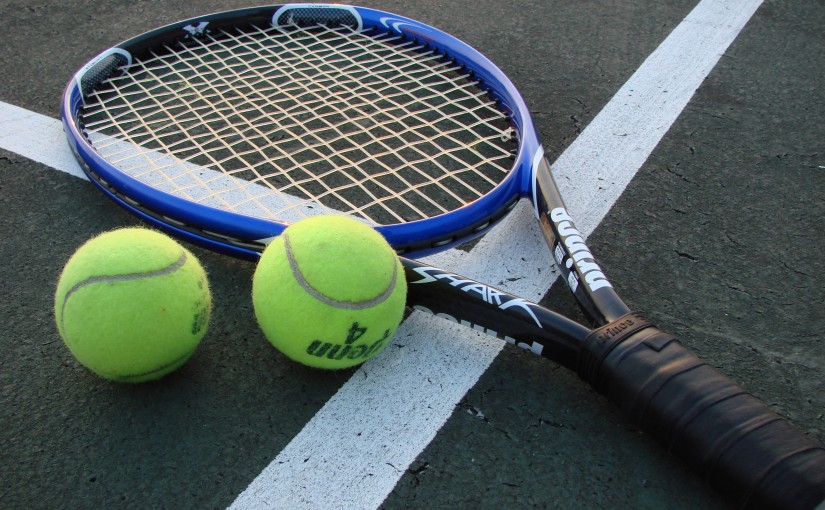 Today, I’d like to write a short note to begin to answer one simple question: which sport is the most conservative? By conservative I mean a sport where the favourite team or athlete wins much more often than the other. As this is quite a large problem, which had been adressed for NFL, I’ll start with some results about some racquet sports, tennis and badminton. I won’t use real data but rather focus on some simulations in order to evaluate the chances to win a match when you’re the #1 tennismen against less talented players.

I won’t explain the rules of scoring in tennis matches, but I’d like to remind you some of the basic principles. To win a tennis match, you need to win 2 or 3 sets. Each set requires you to win at least 6 games, but also two more games than your opponent. And to win a game, you need to score 4 points AND 2 more points than your opponent. These rules mean that a tennis match can last almost forever but as they are very restrictive, they also favor the most efficient player. Let’s have a simple example to understand that.

What happens if we add the ‘tennis’ rule of “2 more points than your opponent” ? The game becomes “the first one to score 2 points in a row win”. The maths needed to get Becky’s changes of winning are a little more complex in this example: one way to deal with that problem is to think about the first two rounds. After these two rounds, there is 81% that the winner is Becky, 1% that it is Adam, and 18% that no one has won yet. If we repeat this process, we get a geometric series which sums to approx. 98.8%. Adam’s chances of winning have dropped even more: only 1.2% now!

Let’s go back to Tennis

Now Becky and Adam are tired of playing a game Adam always loses, and they decide to go outside in order to play some tennis. Suppose that Adam is better at this sport than Becky. A conservative hypothesis is to suppose that he’ll win 51% of the time, while she’ll win only 49% of the time. The difference is fairly minor, and that shouldn’t have a big impact, right?

I write a short program in R which simulates thousands of matches in order to know who wins between the two players. The program is quite simple, here is the part about simulating a game :

The results obtained for 100.000 matches (in 3 winning sets) simulated are compiled in this tabular:

Another interesting result is the following graph:

Even if the edge for the better player is as low as 5 percent (55-45 for each point), the match is clearly one-sided. This means that as long as one player have a predominant position and so a little more chance to win each point than his opponent, he is almost assured to win at the end. That makes tennis a very conservative sport!

In order to compare this result to some benchmark, I run the same simulations about Badminton. The rules are quite different but not so much, as it is required to get to 21 points in order to win a game, with at least a two-points lead. Winning a match requires to win two games before your opponent does so. With a small adjustment, I use the same program as before and the results obtained are compiled in this graph: 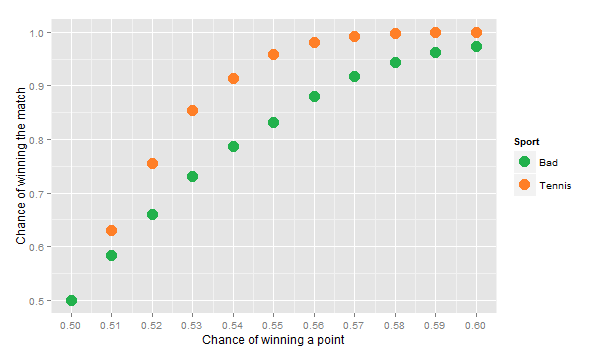 To conclude, compared to Badminton, Tennis is definitely a conservative game!